Daughter of a Cleveland-based immigrant inventor and industrialist, Frieda Frasch married three times: first a fellow Clevelander; next an Italian Count, David Costantino; then a German Baron, Carl Gottlieb von Seidlitz. After leaving Cleveland in early adulthood, she lived continuously between New York, Paris, and Florence, even throughout the Second World War.

We have one object that Countess Costantino has been involved with. 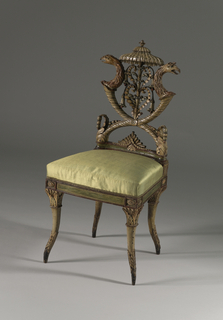