Robert Delaunay (born Paris, 12 April 1885 – died Montpellier, 25 October 1941) was a French artist who, with his wife Sonia Delaunay and others, cofounded the Orphism art movement, noted for its use of strong colours and geometric shapes. Delaunay abandoned stage design for painting in 1905 and his first works are painted in a colourful Divisionist (Pointillist) technique. Under the influence of Cezanne he subdued his palette, but later returned to high-key colour in a series of pictures of Saint-Severin and the Eiffel Tower (c.1910) by which he is best known. Later he started isolating areas of pure colour in his pictures, a method which he called Orphism and which he saw as a logical development of... more.

We have one object that Robert Delaunay has been involved with. 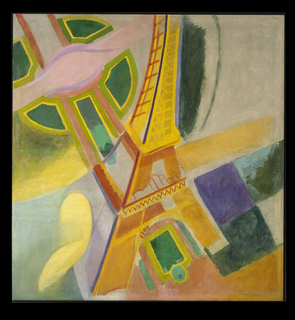