Gareth Pugh’s work resonates a dark, ebullient drama. Since his launch in London in 2005, the Central Saint Martins graduate has presented some of today’s most avant-garde ready-to-wear collections. Replete with spectacle from the start—inflated clothing, Elizabethan ruffs, obscured models—Pugh’s clothing is bold and uninhibited. In 2008, he received the Association Nationale pour le Développement des Arts de la Mode award, among the fashion industry’s most prestigious prizes. Pugh’s collections emphasize feminine strength while supplying a protective armor composed of structured silhouettes. His garments often contrast black and white, fantasy and severity, softness and aggression. An... more.

We have 2 objects that Gareth Pugh has been involved with. 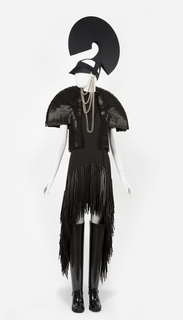 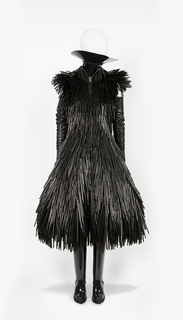