Born in 1928, Barbara Stauffacher Solomon studied painting and sculpture at the San Francisco Art Institute. After the death of her husband in 1956, Solomon moved to Switzerland to study at the Kunstgewerbeschule School of Arts and Crafts in Basel with noted Swiss graphic designer Armin Hofmann. She later received her Master of Architecture from the University of California, Berkeley. As a graphic designer, Solomon’s iconic style mixes the Swiss Modernism of her education with the pop culture of the West Coast. She is well-known for her 1966 large-scale Supergraphics installed in the interior of The Sea Ranch in Sonoma County, California. In addition to her work in graphic design, Solomon is noted for... more.

We have one object that Barbara Stauffacher Solomon has been involved with. 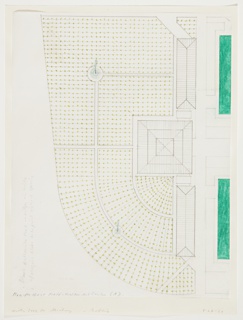