Alexandre Mimoglou has worked throughout his life as an architect, urban planner, painter, and designer. He was born in Greece in 1954, and established himself in France in 1971. He studied architecture and urban planning in Paris from 1979-1980, and then aesthetics at the Sorbonne in 1982. During the 1980’s he became interested in systematic studies of real and imagined environments. Mimoglou explores these theoretical concepts within his designs, which replicate the sense of movement one encounters flowing through urban spaces. In 1982 Mimoglou was commissioned by Knoll International to create a collection of drapery fabrics which were exclusively distributed in Europe. The collection was featured at... more.

We have one object that Alexandre Mimoglou has been involved with. 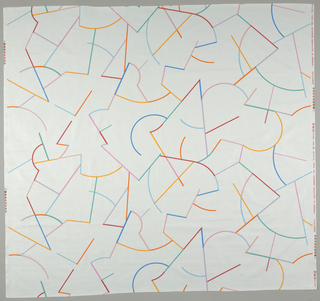