Born in New York City in 1923. Died in 1997. Education: Art Student's League, New York under urban scene painter Reginald Marsh starting in 1939. Ohio State University, M.F.A. 1949. Central figure of American Pop-art in 1960s, his sought an anonymous style by restraining from personal touches and making his art work as being mass-produced. He is famous for his workings with stencils to develop technique for using rows of dots, which mimicks that of commercial printing of comic books. Retrospective at Tate Gallery, London; Guggenheim, New York; Stedelijk Museum, Amsterdam.

We have 2 objects that Roy Lichtenstein has been involved with. 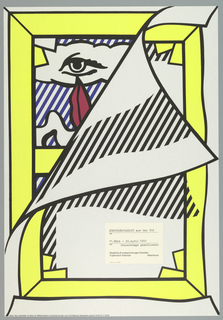