Noted American architect, E. Fay Jones, was a pupil of Frank Lloyd Wright. Jones is primarily known as the creator of the Ozark style of architecture, although his buildings are located throughout the United States. His designs for houses, chapels, and churches are hailed as organic and site-sensitive. Influenced by his training under Wright, the designs often rely on cedar siding, shingles, and stone. Jones is probably best known for the Thorncrown Chapel (built 1980) in the Ozark Mountains of Arkansas. In 2000, the tall, light, tensile structure of glass, wood, and stone was voted the fourth-best building of the 20th century by the American Institute of Architects. In 1980, Jones won a Rome Prize... more.

We have one object that E. Fay Jones has been involved with. 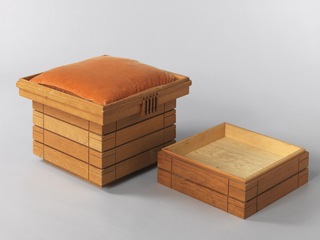