Franz Alt was the son of watercolor painter and lithographer Jakob Alt (1789–1872) and brother of Rudolf von Alt. Like his brother, Alt began studying art with his father, trained at the Akademie der Bildenden Künste, Vienna, and began his artistic career by about 1844. While based in Vienna throughout his life, Alt traveled widely in the Tyrol, northern Italy, and central Europe, making studies of landscapes and picturesque views of local architecture. One of his first albums of watercolors, commissioned by Count Casimir Esterházy, contained views of the northern Italian town Tarvisio and its vicinity. (JGK)

We have one object that Franz Alt has been involved with. 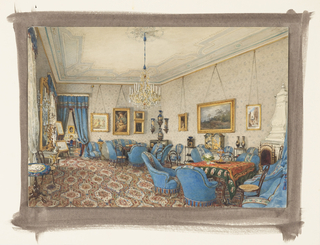