Anna Alma-Tadema began her artistic training at a very young age under the tutelage of her father, Dutch-born painter Sir Lawrence Alma-Tadema (1836–1912). Anna was the youngest daughter from her father’s first marriage. After his wife’s death in 1869, Alma-Tadema married one of his pupils, Laura Thèrése Epps, who became a respected artist. Anna Alma-Tadema’s debut seems to have been at the Grosvenor Gallery in 1885, where two studies she submitted were “indicative of much promise” (New York Times, May 17, 1885). Another view of Townshend House in Regent’s Park, London, may have been painted prior to 1885, when Alma-Tadema and his family moved to the house formerly owned by James Tissot in... more.

We have one object that Anna Alma-Tadema has been involved with. 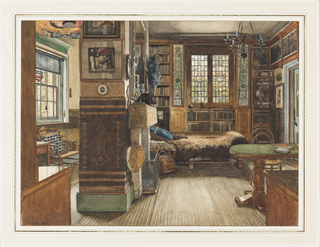