Alexandre Benois was a painter, watercolorist, illustrator, and writer best known for his stage décor and costume designs for Sergei Diaghilev’s Ballets Russes. The son and grandson of court architects, Benois was brought up within the Russian imperial entourage. His father worked at Peterhof and later at Pavlovsk, and was responsible for the Bolshoy Theatre in Moscow and the Mariinsky Theatre in St. Petersburg (Crisp, Clement. "Alexandre Nikolaevich Benois," in Dance Research: The Journal of the Society for Dance Research 13, no. 2, 1995: 47-48). Benois first began his study of painting in St. Petersburg between 1887 and 1888, and from 1891 to about 1910 he participated in exhibitions of the Society of... more.

We have 2 objects that Alexander Benois has been involved with. 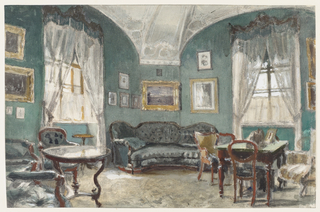