Studio Job is a Dutch design firm known for blurring the boundaries between fine art and design, preferring the freedom of working in the arts over the inherent restrictions involved with mass production. The firm was founded in 1998 by Job Smeets who was joined two years later by Nynke Tynagel; both are graduates of the Design Academy Eindhoven. They are known for the creation of large-scale case pieces inspired by a late-nineteenth century aesthetic, many of which are covered with extreme ornamentation. They have also designed a collection of lamps and furniture of a more surreal nature based on works of architecture. Most of their pieces are produced in very limited editions. Unlike the grand pieces from... more.

We have 3 objects that Studio Job, Dutch, founded 1998 has been involved with. 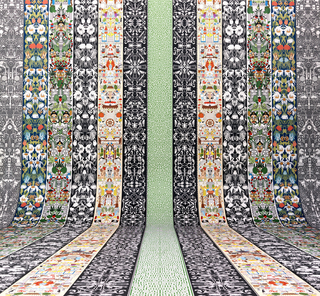