Peter Müller-Munk (1904-1967) trained as a silversmith in Berlin, Germany, focused on crafting each piece by hand. It wasn’t until after he immigrated to New York City in 1926 that the German-born designer switched his focus to industrial design for mass production, creating the Art Deco tableware designs he is best-known for today. Müller-Munk began his career in the United States by working as a silver designer at Tiffany & Co. and exhibiting his luxury metalwork at the 1928 Macy’s Exposition. By 1929, he had established his own silver studio and exhibited at the Metropolitan Museum of Art. In response to the rapid decline in demand for expensive silverwares during the Great Depression,... more.

We have 3 objects that Peter Müller-Munk has been involved with. 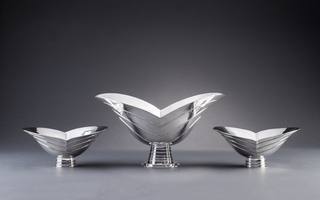