Born in Oakland, California on June 25, 1942, Margo Humphrey earned her MFA in printmaking from Stanford University in 1974. She has taught extensively in the United States, Benin, Nigeria, Uganda, Zimbabwe and Fiji. Humphrey has worked in many different printmaking media, including lithography, monoprint, woodcut, etching, and also drawing. Humphrey had her first solo exhibit in 1965. She has also exhibited work internationally, and with major museums, including at MoMA in New York City, The Smithsonian American Art Museum, the Philadelphia Museum of Art, the Victoria and Albert Musuem, The Museum of Modern Art, Rio de Janeiro, and the National Gallery of Modern Art, Lagos. In 2011, the Hampton University... more.

We have one object that Margo Humphrey has been involved with. 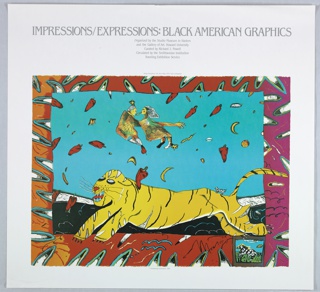