IB Andersen was a Danish born artist, architect, and illustrator, and the son of artist and poster designer Vlademar Anderson (Danish, 1875-1928). From 1926-29 Andersen studied architecture at the Academy of Arts in Copenhagen, Denmark. While still in school in 1927, Andersen took the job for which he would become best known, as a cartoonist for the newspaper Politiken. Andersen continued to work for Politiken and its magazine Magasinet until the early 1960s. Throughout his career, he took on graphic arts commissions for book covers and posters. His work of the 1930s suggests the work of AM Cassandre, but his style developed over time, reflecting the influence of his travels to Brazil in the early 1930s,... more.

We have one object that IB Andersen has been involved with. 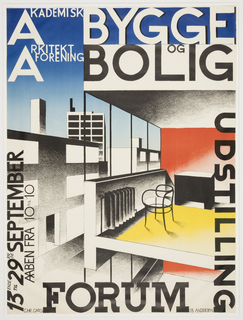