Louis C. Kalff was a pioneering Dutch architect and designer. Born in Amsterdam in 1897, Kalff trained first in the applied arts before seeking an architecture degree at the Technical University in Delft. Kalff ultimately graduated with an engineering degree in 1923. While still a student, Kalff began designing posters and flags, and worked as a designer of theater sets. In 1925 Kalff wrote a letter to Anton Philips, the president of Philips & Co., a company based in Eindhoven that had established itself as a major producer of light bulbs and radio tubes. Kalff told Philips that he felt the company's advertising could be improved. Philips hired him within days as the company's Art Director. Kalff... more.

We have one object that Louis Christiaan Kalff has been involved with. 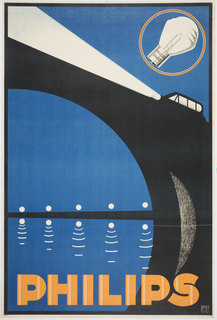