Stone studied at the University of Arkansas before moving to Boston in 1922, where he worked as an office boy in the local architecture firm of Strickland, Blodgett & Law and attended night classes at the Boston Architectural Club, where he met architect Henry R. Shepley who hired Stone as a draughtsman at his firm. Stone won a scholarship to Harvard University’s School of Architecture and in 1926 transferred to MIT. In 1927 he won the annual competition for the Rotch Travelling Scholarship which afforded him the opportunity to travel throughout Europe and North Africa on a two-year stipend. Upon his return to New York in 1929, Stone worked for the firm of Schultze & Weaver for one year, working on the... more.

We have one object that Edward Durell Stone has been involved with. 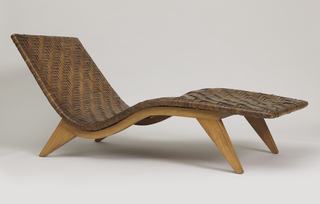