Charles (Charley) Harper (American, 1922-2007) was raised on his family’s farm in West Virginia. He studied at the Art Academy of Cincinnati until he was drafted to serve during World War II. After completing his service, he returned to the Art Academy and graduated in 1947. He married his classmate, Edie McKee, shortly after their graduation. They lived and worked from home studios in Cincinnati, where Harper also taught at the Art Academy. They had one son, Brett, with whom they eventually formed Harper Studios. Harper’s subjects featured nature and wildlife, particularly birds. He created posters for the U.S. National Park Service and designed interpretive displays for Everglades National Park. He... more.

We have one object that Charles Harper has been involved with. 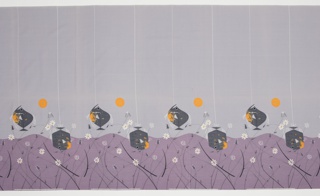